We use cookies on our website. Some are essential, while others help us improve this site and your user experience. Do you agree to the use of all cookies?

KADEN - About the brand

Since the founding of the cooperative in 1950, the toys were marked with a production mark in the shape of two connected circles with the letters K D N inscribed in them. This mark was used until approximately 1970-1972, during which time a new production mark began to be used, which has the shape of a child kneeling by a toy. This brand, in a slightly modified form, is still used by the company KADEN, s.r.o. New Castle.

Development of the KADEN brand:

Since its foundation, the KOVODRUŽSTVO Náchod cooperative has had as its main production activity the production of mechanical toy. As an additional activity, it has also carried out installation of central heating, production of metal furniture, and since 1975 has also been involved in electronic production (after merging with the STEZ cooperative)

In 1994, the premises of the KADEN Náchod cooperative were divided into individual s.r.o. and the production of toys has since been carried out by the combined establishments Nový Hrádek and Ohnišov (the Bystré establishment was returned in restitution) under the name KADEN, s.r.o. Nový Hrádek. Before this division, another toy manufacturer, the company KOVAP, výrobní družstvo, Náchod, separated from the original cooperative.

Next, only model production for companies such as Škoda-Auto, Tatra a.s., and long-term cooperation with the world's leading manufacturer of collector trucks, Tekno b.v., followed. until today, when we specialize in small series production of models in Nový Hrádek.

In 2022, the company Kaden s.r.o. received a Decision on the allocation of a subsidy from the European Funds for Regional Development through the Operational Program Entrepreneurship and Innovation for Competitiveness, drawn through call 01_21_374 Application IX intended for the implementation of the project entitled Development of additive and small-batch technologies for the production of CZ models of transport vehicles. 01.1.02/0.0/0.0/21_374/0026427. The project is focused on the development of methods of small-scale production of models of current and historical means of transport and on the design of new model series. The expected output of the project is three functional model samples, three prototypes and one verified production technology. 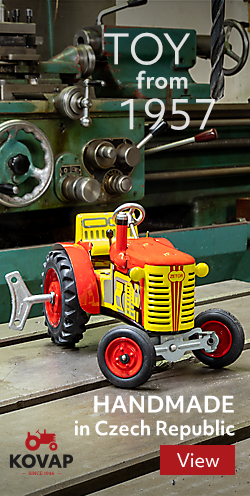